A group of British parliamentarians have written to UK’s foreign secretary warning that “Sri Lanka’s political stability is at grave risk” and called for discussion on the suspension of trade concessions to Colombo.

The seven parliamentarians, who are part of the All Party Parliamentary Group for Tamils, said they were “deeply disturbed by the recent, undemocratic actions” on the island, including the appointment of Mahinda Rajapaksa as prime minister. The letter from the lawmakers said Rajapaksa is accused of “perpetrating war crimes, crimes against humanity and egregious human rights abuses”.

The letter went on to state,

“Sri Lanka’s political stability is at grave risk. The rule of law is under attack. And the human rights of its citizens are, once again, facing severe challenges.

Given that the Tamil people have so often borne the brunt of gross human rights violations, many from the community – both on the island and here in the UK – are terrified about what the future may hold for them, their family and friends.”

In conclusion the MPs inquired as to the discussions the British foreign secretary was having with his EU colleagues “about the possible suspensions of trade benefits to Sri Lanka – which are contingent on compliance with human rights treaties – should the constitutional crisis continue”.

Their call comes after the European Union warned that Colombo may be stripped of trade concessions, as the political turmoil on the island deepened. The fallout has had a massive impact on the island, as tourism has plummeted and international organisations warning of sanctions. (Tamil Guardian)

See the full text of the letter below. 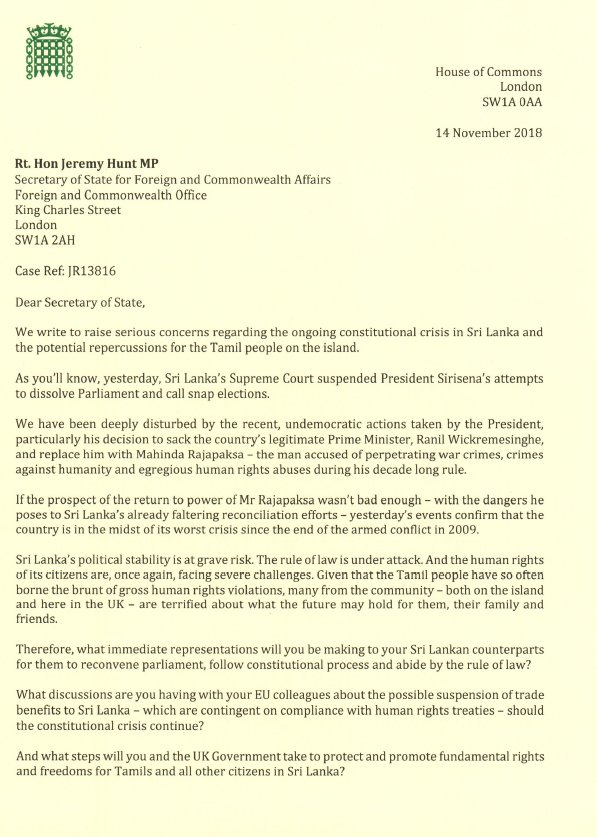 eyeadmin
5th May 20225th May 2022
Sri Lanka is currently midst of the worst economic crisis the island has seen since independence. After food inflation reached...
eyeadmin
8th April 20228th April 2022
The North Atlantic Treaty Organisation (NATO) has announced that it will begin engaging in the Asia-Pacific region both practically and...