The Chinese government is leveraging billions of dollars in debts to gain political leverage with developing countries across Asia and the Pacific, a new report presented to the US State Department claims.

The independent report, written by a pair of Harvard University scholars, identified 16 countries targeted by the Chinese government for “debtbook diplomacy, ” with Pakistan, Djibouti and Sri Lanka identified as being most vulnerable.

According to the report, in some cases the huge debts grow to a size too large to pay back, allowing Beijing to leverage the loans to “acquire strategic assets or political influence over debtor nations.”

This could allow the Chinese government to extend its influence across the Indian Ocean and the Pacific, encircling India and Australia as well as helping to consolidate its position in the South China Sea, the report said.Last month, Australian Prime Minister Malcolm Turnbull said he viewed “with great concern” any foreign military bases being built in the South Pacific, following reports Beijing was in talks with Vanuatu to host Chinese forces.

According to the new report, Vanuatu, just 2,500 kilometers (1,553 miles) off Australia’s coast, has taken at least $270 million in Chinese loans in the past decade, worth 35% of its GDP. Both China and Vanuatu have strongly denied there were ever discussions over a PLA military presence on the island.

There is also concern in Washington that China is poised to gain control of a major commercial port in Djibouti, where the US and China have military bases.

A US State Department official told CNN Tuesday it encouraged China to promote and uphold internationally accepted best practices in infrastructure development and funding. “We need to ensure recipients have options that allow them to retain their sovereignty and future control of their economies,” the official said. 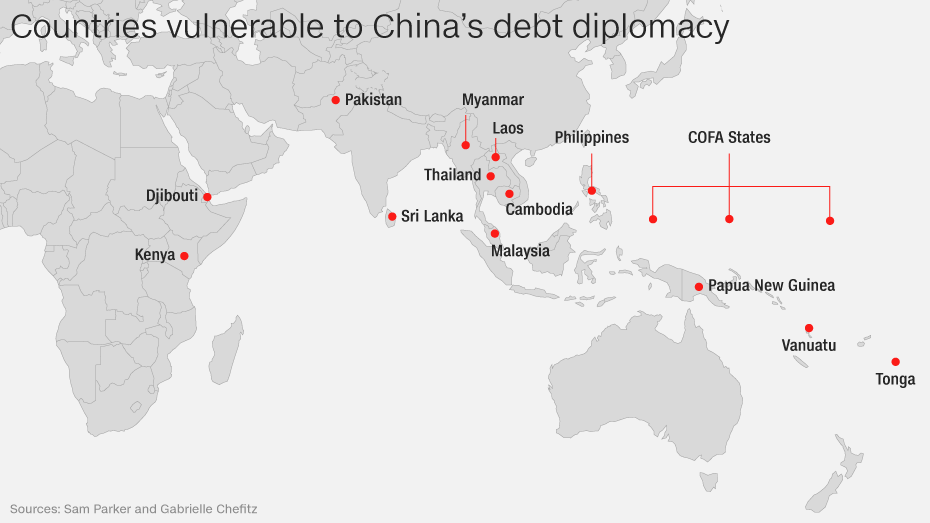 According to the report, there are a number of ways in which Beijing and state-owned enterprises leverage debt to help China’s strategic aims. In one case, infrastructure built with Chinese loans, has then been leased back to Chinese interests to pay off the original debt.

In 2017, an unprofitable Sri Lankan port built with billion-dollar loans from Beijing was leased to Chinese state-owned firms for 99 years to help repay the country’s debts.

The report’s co-author Sam Parker said there were concerns these ports could be used by Chinese naval vessels once they were under state control. “There’s definitely the potential where they can have it go from commercial, to occasional visit, to logistics, to humanitarian and then maybe finally a military base,” he said.

In the Pacific, nations such as Vanuatu, Papua New Guinea and Tonga all owe the Chinese government billions of dollars in loans, encircling US allies Australia and New Zealand.

Meanwhile Chefitz said Beijing has used infrastructure incentives in the South China Sea to help break any broad opposition to the Chinese government’s territorial ambitions in the contested sea.

Former Australian Foreign Minister Gareth Evans is quoted in the report saying Laos and Cambodia, each of which has borrowed more than $5 billion, are now “wholly owned subsidiaries of China.”

The US State Department will be briefed on the report in the near future. But both authors said there appeared to be nothing the United States could do to offset China’s growing advantage. “The US government isn’t going to throw 1 trillion dollars at this problem. It’s not going to absorb the debt of our private sector companies and it won’t be able to focus the entire government in one effort for 20, 30 or 50 years as China is able to do,” Chefitz said.

At his daily press conference, Chinese Foreign Ministry spokesman Lu Kang said said China’s foreign policy was based on “mutual respect and win-win cooperation.” “As for other parties, they shouldn’t be presumptuous based on their own views — nor should they assume economic cooperation between developing countries always have ulterior political motives,” he said.

Many of the loans are being given out as part of China’s signature Belt and Road infrastructure program, which gives loans to developing nations to fund ports, railways and other initiatives across Asia, Europe and Africa.

Report co-author and Harvard scholar Gabrielle Chefitz said the loans under the Belt and Road plan, as well as China’s other development grants, take a very different form to previous US programs such as the Marshall Plan. “The Marshall plan was largely grants whereas China is giving this money and expecting something in return,” she told CNN.

“And because of the relationship between the state and these companies, it’s able to get returns which aren’t wholly economic, which are strategic in nature … like a veto in ASEAN, like a port, or a vote at the United Nations.”

But Merriden Varrall, director at the Lowy Institute’s East Asia Program director, told CNN there was still a lack of evidence as to how China was utilizing its loans around the region. “Nobody knows what China’s motives are, presumably they’re not simply altruistic, Australia’s interests in providing aid and investment are certainly not purely altruistic either,”she said. (CNN)

eyeadmin
22nd November 2022
Scholars have pointed out that Sri Lanka has an Army far too big for its size and population, and has...
eyeadmin
18th November 202218th November 2022
The Canadian Tamil Congress (CTC) yesterday handed over a letter to Minister of Justice Wijeyadasa Rajapakshe consisting of several demands...