As China grows more powerful, it is displacing decades-old American pre-eminence in parts of Asia. The outlines of the rivalry are defining the future of the continent.

Last week, a group of 11 nations signed a trade deal + that had originally been conceived as a US-led counterweight to China — but after President Donald Trump pulled out, the pact went forward without the United States. It was the latest turn in Asia’s gradual transition from American dominance to something much more fluid.

The stakes could hardly be higher: The two powers are seeking to reshape the economies and political systems of the world’s most populous region in its own image.

The shift may accelerate under Trump, whose volatile foreign policy and rejection of trade agreements is already forcing Asian nations to rethink their strategies.

The trade deal reached last week is a powerful signal of how countries like Australia and Japan are forging ahead without American leadership. The deal replaces the Trans-Pacific Partnership, which Trump had effectively killed.

Every Asian country now trades more with China, often by a factor of 2 to 1, an imbalance that is only growing as China’s economic growth outpaces that of United States. 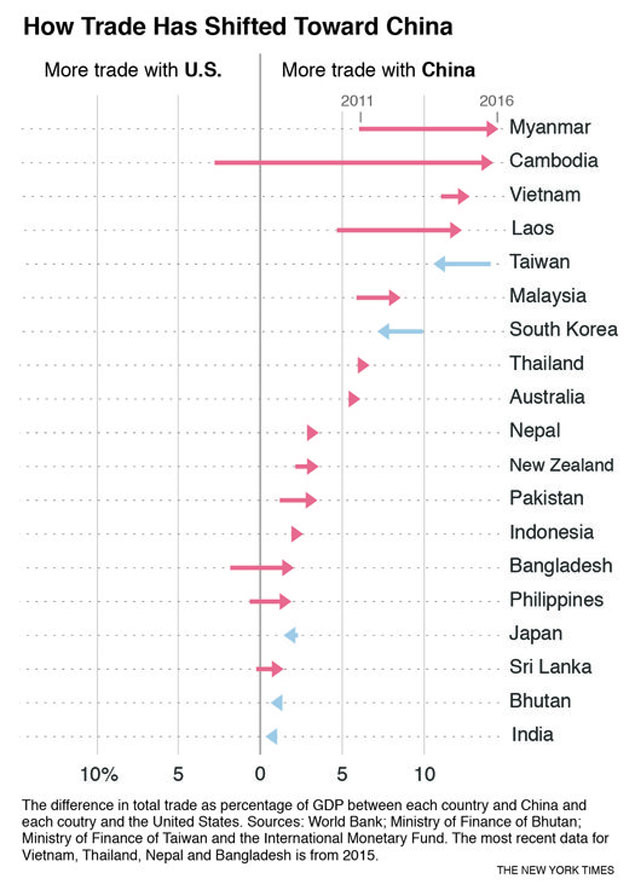 Asian leaders know that their economies — and therefore, domestic politics — rely on Beijing, which has shown it will offer investment to friends and economic punishment to those who displease it. 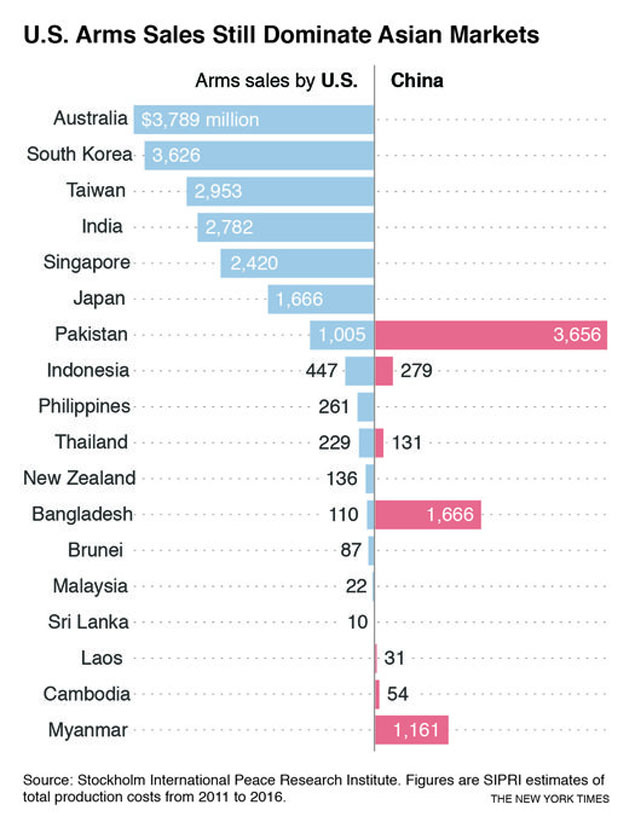 Countries that purchase American weapons bind their militaries and their foreign policies to the United States. The imbalance reflects the extent of American military relationships in Asia, which date back to World War II.

Many of the 20 countries caught between Beijing and Washington face an impossible choice between Chinese wealth and American security.

“These countries don’t want to have to choose sides,” said Tanvi Madan, an Asia specialist at the Brookings Institution.

So they’re not. Instead, most are pursuing strategies intended to draw maximum benefit from both powers, minimize risks of angering either and preserve their independence.

The result will likely be something very different from Cold War-era Europe, which was divided cleanly between two sides. Instead, the continent will fracture along many lines at once as countries accept, reject or manage China’s growing influence.

Each strategy involves hard compromises and provides a model for how others in Asia, and perhaps one day globally, will cope with a Chinese-American world.

Though the world is changing in Beijing’s favor, Japan is a reminder that China remains a long way from becoming an American-style power. And it provides a template for counteracting China.

Japan is matching China’s rise with its own resurgence, leveraging its economy — the world’s third-largest — to build an independently powerful military and set of diplomatic relationships. It is attempting to reconstitute an informal and implicitly anti-Chinese alliance known as “the quad,” which includes India, Australia and the United States.

The “quad” remains mostly aspirational, and its members so far exert only a fraction of China’s economic and military influence in the region.

Still, Japan represents the headwinds facing Beijing. Asia’s largest economies and its leading democracies, rather than bending to Chinese power, are counterbalancing it.

Most countries lack Japan’s economic power, but they can still follow its lead. Rather than meekly accepting American withdrawal, Japan shows how countries can compensate for it.

The region has more bad news for China. Even its sole ally, North Korea, is increasingly independent. Its nuclear and missile tests often appear timed to humiliate Beijing, and give China’s adversaries like Japan an excuse to build up their militaries. North Korea apparently hopes to one day strike a deal with Washington, allowing it to climb out from a half-century of Chinese dominance. If Beijing cannot keep even North Korea as a client state, it will have trouble cultivating others.

Sri Lanka might not seem like a geopolitical bellwether. But Asia-watchers have been glued to developments here since 2014, when a Chinese submarine sailed into a port built with Chinese investment. It marked a new era, in which China is converting its economic power into military power — and, in poorer democracies, into political influence.

China has since developed more infrastructure projects across Asia, particularly in strategically vital ports and transit corridors. Those projects begin as joint developments but can end up in Chinese hands. In December, Sri Lanka, unable to pay debts on the port’s construction, granted China a 99-year lease.

“The Chinese are using their abundance of labor, capital and workforce to project their influence,” said Mira Rapp-Hooper, a scholar of Asian security issues at Yale Law School. She added, “It’s mostly taking place in countries where the US does not have a lot of influence or give a lot of aid.”

This a promising model for China, whose economic strengths naturally fit the needs of small, developing countries. It is even pushing in countries where the United States has spent heavily, such as Pakistan. And it is slowly extending this model beyond Asia, giving it the outlines of what could one day be a global network.

But small, poor allies are less powerful than rich ones, which tend pro-American, and Beijing can be clumsy when dealing with democracies.

Still, China’s success in South Asia shows it can hem in a powerful adversary. It is leveraging trade and investment to build ties with every country on India’s border. Beijing’s unstated goal: encircle India before it can rival to Chinese power. While India is taking a harder line against China, it is less practiced in regional alliance-building and has fallen behind.

The Philippines: Mining the middle

Many Asian leaders are eluding the great powers by hedging between them. Few have done so as creatively and brazenly as President Rodrigo Duterte of the Philippines.

Upon taking office in 2016, Duterte suggested that he might end his country’s 65-year alliance with the United States. He rushed to Beijing, promised cooperation with China and — as if to signal there was no going back — crudely insulted President Barack Obama.

Instead, Duterte ended up collecting concessions from both powers. The Americans reduced Duterte’s obligations to the alliance while continuing to guarantee his country’s defense. The Chinese offered Duterte favorable terms on maritime disputes and possible investment deals.

He never did switch sides.

Such stories have played across Southeast Asia, where China has been at its most confrontational. Beijing had hoped that it could coerce smaller countries to accept its dominance. Washington thought it might galvanize an anti-Chinese bloc. Nearly every country has found a middle path.

Even Vietnam, a traditional Chinese adversary, has resisted both Chinese influence and American overtures. Almost two years after Obama lifted his country’s arms embargo on Vietnam, hoping to bring it into the American fold, it still buys most of its arms from Russia.

But China’s leverage in the region can only grow, particularly if the United States continues withdrawing. Rapp-Hooper called attention to growing scandals in Australia and New Zealand over Chinese influence-buying.

“These countries could not be more aligned with our interests, but there is still a lot of discomfort about stepping away from Chinese money,” she said. “Those are tests of what we’re up against.”

eyeadmin
26th June 202226th June 2022
The flying visit of a team of top Indian officials headed by Foreign Secretary Vinay Kwatra on Thursday, indicates New...
eyeadmin
30th May 202230th May 2022
At this time, at least two South Asian states, Pakistan and Sri Lanka are facing serious political and economic crises....
eyeadmin
12th May 202214th June 2022
John Hinderaker has been writing at PowerLine about the economic catastrophe taking place in Sri Lanka. Until very recently, that country...
eyeadmin
1st May 20221st May 2022
India is Sri Lanka’s only neighbour. It follows that what happens in Sri Lanka, especially if it involves the suffering...
eyeadmin
21st April 202221st April 2022
SRI Lanka figures very largely in the imagination of the people of South Asia. Not only is ‘Ceylon tea’ considered...
eyeadmin
16th April 202216th April 2022
Sri Lanka slipped into an economic crisis with socio-political implications in March 2022. I have explained the crux of the...