Al Hussein is expected to hold discussions with the new Sri Lankan government, before a highly critical report on alleged war crimes committed in the country is submitted before the Council during its 30th session in Geneva next month..

Sri Lanka’s main Tamil Political Party, the Tamil National Alliance (TNA) has been calling for an international independent investigation on alleged war crimes said to have been committed during the final stages of the war between the Tamil Tiger rebels and the Sri Lankan military.

The report is expected to be critical towards the rebels and the former government led by Mahinda Rajapakse and will contain testimonial from victims of the war and their relatives.

Rajapakse had staunchly defied Western pressure to investigate allegations of atrocities, insisting that not a single civilian was killed by troops during the decades-long conflict.

Sources told Xinhua that Al Hussein is expected to present to the government a copy of the UN report before it is taken up at the UNHRC.

The report was initially expected to be submitted to the Council in March but the island nation won a six month extension after the UN human rights chief praised the new government’s willingness to open the country up to scrutiny.

The new government, whilst maintaining that it would not allow any international probe, has vowed to conduct its own domestic investigations into the allegations of war crimes and have assured that the investigation will meet international standards.(Xinhua)

However,spokesperson for the UNHRC says he will not visit Sri Lanka before the UNHRC sessions in September 2015 according to the editor of Swarnavahini. 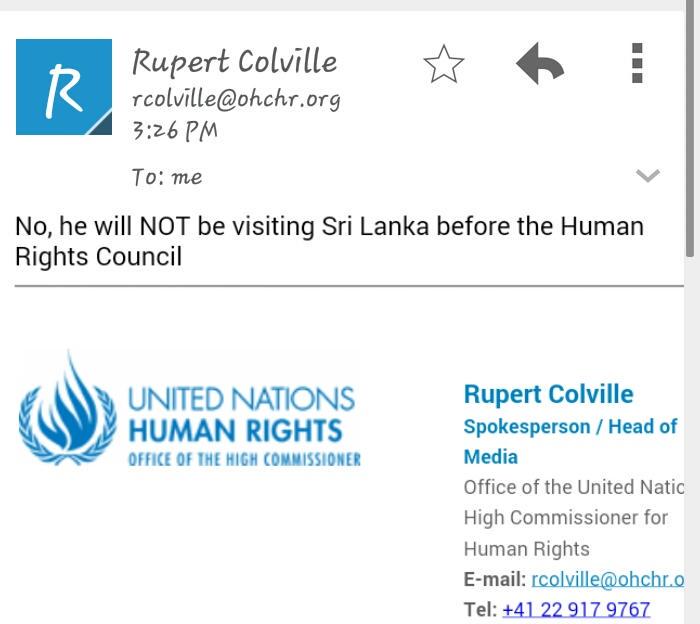 eyeadmin
11th June 202211th June 2022
“In the spirit of that tradition, today’s iteration of the Quad can lead the way in working to avoid an...
eyeadmin
5th May 20225th May 2022
Sri Lanka is currently midst of the worst economic crisis the island has seen since independence. After food inflation reached...
eyeadmin
8th April 20228th April 2022
The North Atlantic Treaty Organisation (NATO) has announced that it will begin engaging in the Asia-Pacific region both practically and...