The Islamic State plans to take over large parts of the world, including almost the entire Indian subcontinent, by the next five years, according to a chilling map that features in a new book on the dreaded terror group.

According to the map, the Islamic State of Iraq and Syria (ISIS) plans to take control of the Middle East, North Africa, most of the Indian subcontinent and parts of Europe, within the next five years, to complete its caliphate. 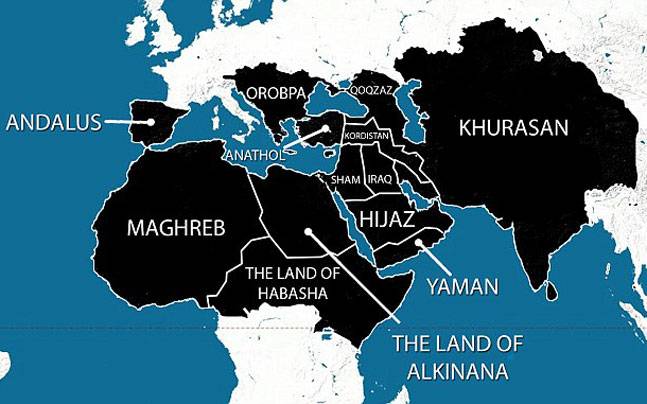 The  caliphate, a state governed by Sharia law which ISIS plan to claim, covers areas from Spain in the west to China in the east, the Mirror reported citing the map.

The map reveals the calculated way ISIS plans to take over the world by 2020.

According to the map, Andalus is the Arabic name given to the parts of Spain, Portugal and France that were occupied by the Moors from the 8th to the 15th century while the Indian subcontinent would come under ‘Khurasan’.

BBC reporter Andrew Hosken, who includes the map of the targeted areas in his new book ‘Empire of Fear: Inside the Islamic State’, said ISIS wants “to take over all of what they see as the Islamic world.

A seven-step ISIS programme, dating back almost 20 years, includes the US being provoked into declaring war on the Islamic world between 2000 and 2003 and an uprising against Arab rulers between 2010 and 2013, the report said.

ISIS have up to 50,000 members and cash and assets of nearly 2 billion pounds, partly due to their control of oil and gas fields in Iraq and Syria, it said.

“They want to take over all of what they see as the Islamic world. Once they have their caliphate, they plan to turn against the rest of the world. They envisage the whole world being under their rule,” Hosken was quoted as saying.

“They have 60 nations against them, including the United States and Russia, so one would think that is pretty unlikely.

But one would have thought the first steps were unlikely as well,” he said.

Hosken says in his book that Abu Musab al-Zarqawi, who founded the terrorist group that would later become ISIS, in 1996 described the seven-step programme that would lead to Muslim victory by 2020.

Eighty per cent of their leaders had been captured or killed and they ended up as a little rump. We didn’t finish them off and like a cancer they came back,” Hosken said. (India Today)

eyeadmin
16th December 201916th December 2019
India is increasing the area covered by its Indo-Pacific policy to include the western Indian ocean and Arabian Sea. This...
eyeadmin
24th November 201924th November 2019
Addressing the Woodrow Wilson International Centre for Scholars think tank on 21 November 2019, the Principal Deputy Assistant Secretary of...
eyeadmin
11th August 2018
A short while after Sri Lanka’s bloody civil war came to an end in May 2009, Tamil Nadu’s then chief...
eyeadmin
14th January 2018
China’s plan for a modern Silk Road of railways, ports and other facilities linking Asia with Europe hit a $14...
eyeadmin
20th December 2017
China’s political assertion in the Indian Ocean, especially Sri Lanka and Maldives, is a response to India’s moves in the...
eyeadmin
25th October 2017
The Additional District Sessions Court has acquitted Naam Tamilar Katchi leader S. Seeman and film director I. Ameer Sulthan in...