The new president promises a new leaf for politics

Many Sri Lankans are still gobsmacked by an election on January 8th that ended nine years of presidential rule by Mahinda Rajapaksa, a strongman appearing to settle in for the long term. Replacing him is Maithripala Sirisena (pictured), until recently the health minister, who won 51.3% of the votes on a record turnout of 81.5%. Mr Sirisena was backed by Sinhalese unhappy about inflation, corruption and the Rajapaksa dynasty, as well as by minority Tamils, Muslims and Christians worried by repression since the end of the civil war or by the weak rule of law.

Mr Rajapaksa conceded defeat early on January 9th. Some in Mr Sirisena’s camp claim that was an act, and that Mr Rajapaksa first explored whether the attorney-general, chief justice and heads of the army and police would agree to cancel the election—in effect, a coup attempt. Mr Rajapaksa denies it, saying that he had “always bowed down to the people’s verdict”.

Coup talk may explain Mr Sirisena’s hasty swearing-in on January 9th and his appointment, minutes later, of Ranil Wickremesinghe as prime minister. Mr Wickremesinghe has twice held that post before. A behind-the-scenes operator, he may prove stronger than the president. The smallish cabinet they formed on January 12th is likely to expand as former supporters of Mr Rajapaksa defect.

An early priority for Mr Sirisena is fulfilling his promise of constitutional change within 100 days. He wants to tame a presidency that Mr Rajapaksa made nearly paramount, especially after a constitutional amendment in 2010 that did away with presidential term limits and with independent commissions to appoint bureaucrats, judges, police and electoral officers. Reversing the amendment would empower Parliament and the prime minister.

Habits of sycophancy will widen support for the new rulers. The state-run press, especially, toadied up to Mr Rajapaksa and is already fawning upon Mr Sirisena. Parliamentarians fiercely loyal to the old government now flock unashamedly to the new. One defector this week breezily dismissed his former boss as a mere “dead body in the house”.

Yet much remains in flux. Until the dust settles, it is not obvious whether constitutional reform can follow; nor whether the chief justice, ultraloyal to Mr Rajapaksa, can be replaced with someone better. Both, in theory, require support from two-thirds of Parliament. Just possibly the chamber could reconvene as a constitutional assembly, as happened in 1972, allowing some reforms to be pushed through with only a simple majority.

Meanwhile, the victorious coalition could come under strain. On January 15th Mr Rajapaksa was poised to lose control of the Sri Lanka Freedom Party, but he can yet sow division. He never seriously sought national reconciliation after ending the 26-year civil war in 2009, though he rebuilt much of the Tamil-dominated north. Since his defeat he has tried stirring nationalist sentiment, blaming his defeat on Muslim and “Eelam” (ie, secessionist Tamil) voters; his implication is that the majority Sinhalese were betrayed. An observer in Colombo worries that such talk could provoke “very ugly” hostility towards minorities.

Parliamentary elections are likely in April or May. Ahead of those, the new government must judge how much to concede to Tamil allies without alienating Sinhalese. Tamils blame Mr Rajapaksa for the deaths of perhaps 40,000 northerners late in the war. Now they expect Mr Sirisena to let civilians evicted by the army return to their land. They also want sympathetic figures put in key posts in the north, and an end to surveillance and intimidation.

No war-crimes trials are looming. During the campaign, Mr Sirisena said he would not order the prosecution of Mr Rajapaksa, aware how unpopular that would be among the Sinhalese and the army. And his own spell at the war’s end as (a largely toothless) defence minister may add to his reluctance. In any case, most Tamils inside Sri Lanka see reconciliation as more important than trials. (A large Tamil diaspora is more strident.) 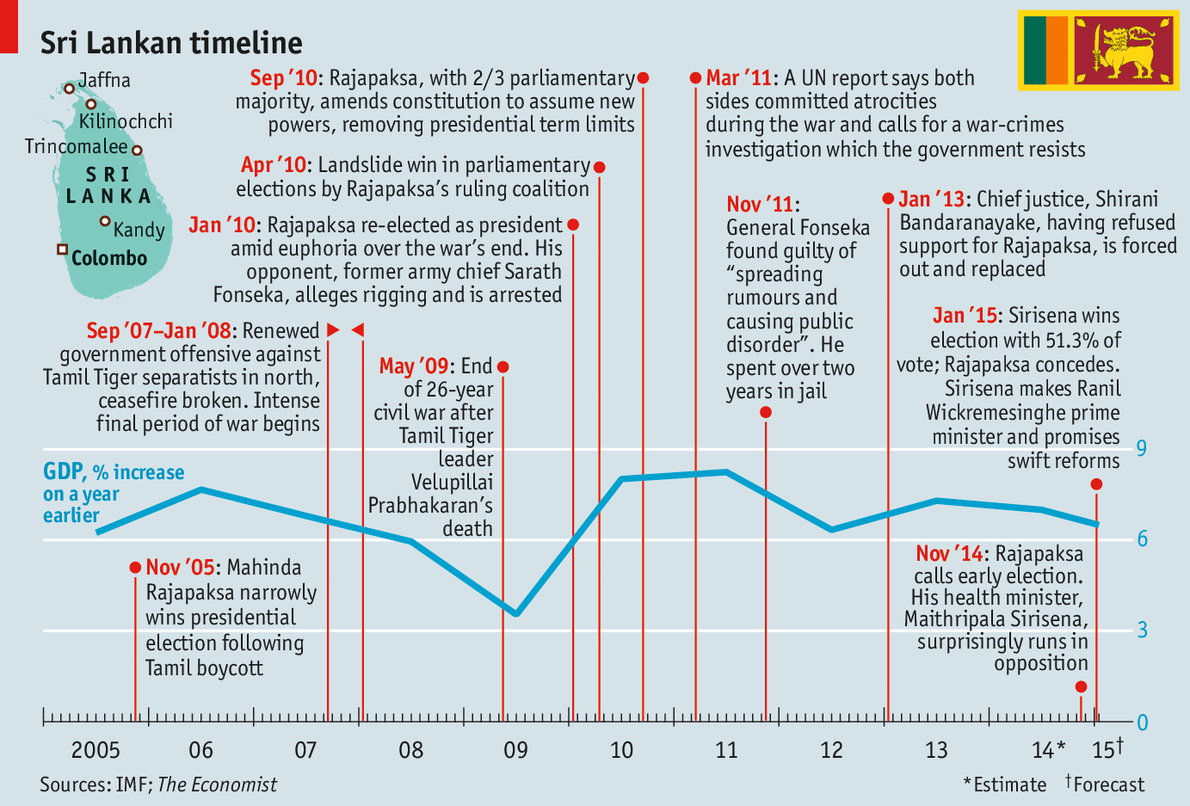 Still, a rigorous inquiry into events at the end of the war would be valuable. From afar, the UN is already conducting one and will now seek the access to the country it has been denied. Sri Lanka could improve on its own “Lessons Learnt and Reconciliation Commission”, which whitewashed the war crimes. Someone should probe persistent rumours about mass graves under army-controlled land in the north.

Amid the political drama, Pope Francis arrived on January 13th. Christians make up only 7.4% of the population, yet he drew large crowds, telling Sri Lankans that confronting wartime atrocities would help reconciliation. In Colombo, the capital, he called for the “pursuit of truth, not for the sake of opening old wounds, but rather as a necessary means of promoting justice, healing and unity”. The idea of a South African-style truth and reconciliation commission could be resurrected.

Other foreigners wonder whether foreign policy will be redirected. Sri Lanka’s diplomatic and economic ties to China are deep: in September President Xi Jinping visited and promised many development projects, adding to an estimated $6 billion or more in loans already dispensed. India dislikes the chumminess, all the more furiously after spotting a Chinese navy submarine twice visiting Colombo. If Mr Sirisena now signalled warmer ties with India, that would also please Western powers wary of China’s regional influence. On several fronts, Sri Lanka’s new rulers have much to change. (The Economist)